Iggy Azalea has gone OFF at Guy Sebastian via Twitter and has made Australian music history with this gem of a line: “best of luck to you and your fedoras!”.

As reported by 10Daily, it all started when Australian Idol alumni Guy Sebastian went on ‘The Kyle and Jackie O Show’ this morning. He was talking about his time sharing the judge panel on X Factor with Iggy back in 2016. He told the radio hosts, “She made us all wait for like three hours, and rocks up [on set] and has an attitude.”

“I didn’t like Iggy, I was pretty open with that. She was awful to me,” the ex-idol star continued to say she’d also arrive on set late with no apology for keeping everyone waiting.

Naturally, word got back to Iggy pretty quickly and to everyone’s delight, she decided to air her issues with Guy Sebastian the right way: via Twitter.

The tweets (which are now deleted) are shown down below. In summary though: Iggy begins by questioning how she can be late for a show that’s filmed live — a fair enquiry honestly. She then calls him out, citing previous interviews where he called her sweet, before referencing a time where he apparently apologised for starting beef for the sake of the show producers. She swiftly accuses Sebastian of ‘using her to drum up attention for a show’ before saying “I do think you dislike me but that is just deep rooted hatred of the “type” of woman iam [sic], flamboyant and outspoken.”

This all comes before probably the best Twitter burn we’ve seen all year, “Anyway; best of luck to you and your fedoras!”

She continued, “Everyone please watch guy Sebastian he’s on the voice [sic] Australia and he really, really desperately needs the ratings to feed his children. Xoxo.”

Read the beauty that is Iggy’s tweets below, courtesy of Junkee. 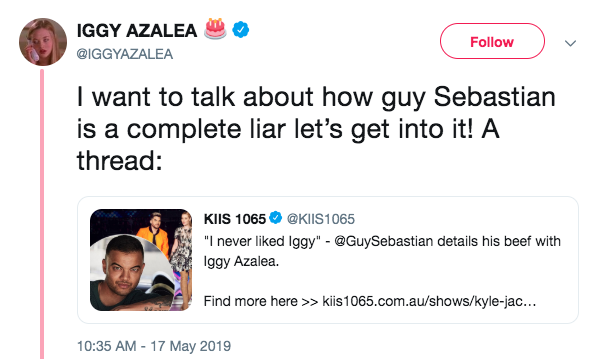 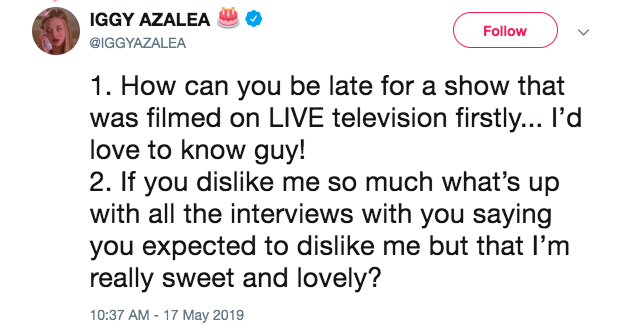 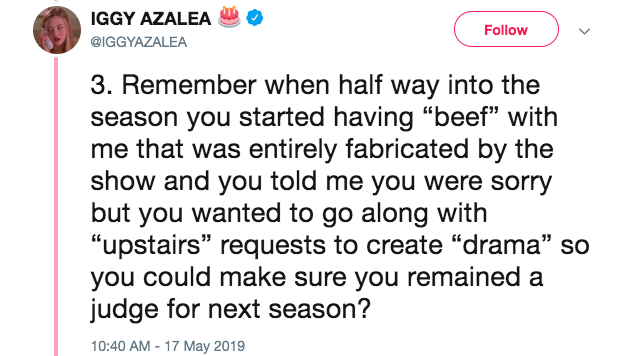 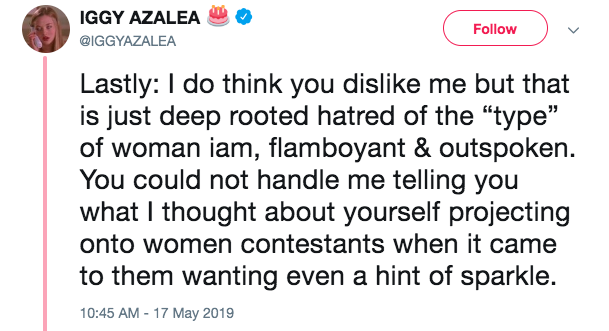 We can only hope there’s more to come.