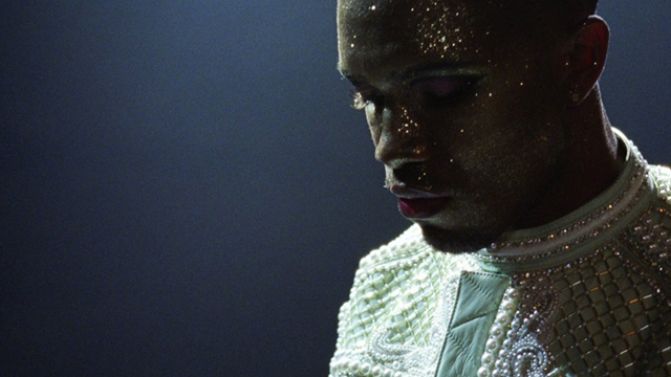 Frank Ocean‘s return to the live stage continues to gather momentum, with his latest performance taking place in Sweden at Way Out West festival.

Ocean returned to the stage after a three year hiatus in June this year, and he continued to show glimpses of what he’s capable of with this latest performance of several tracks from Blonde accompanied by a string orchestra.

The strings joined Frank on stage to perform ‘Nikes,’ ‘Good Guy’ and ‘Ivy,’ adding an incredible layer of atmosphere to his already captivating performance style.

He’s also scheduled to perform at Flow Festival in Helsinki this weekend, and with every live show he performs we gather more hope that Frank may return to Australia in the not too distant future.

Watch clips of his performance at Way Out West below.

Queen B’s world tour plan’s for her Lemonade may have been derailed by the whole getting-pregnant-with-twins-thing, but we’re confident that we’ll eventually see her return down under for the first time since 2013. We’ll just have to wait.

Mr. Ocean broke all our hearts when he exited his 2013 debut Aussie tour, including his headline set at Splendour, and that was after he pulled out of a planned 2012 Aussie tour. He’s yet to make his way back to us, but after just breaking a three-year hiatus from playing live, we’re holding out hope that he’ll grace us with his presence again soon.

It’s been seven years since virtual punks Gorillaz brought their live show to Australia, and we’re getting impatient. But with Damon Albarn and Jamie Hewlett officially reactivating the band and hitting us with brand new album Humanz this year, a comeback surely can’t be far off.

Radiohead can’t decide if they’ll bring their A Moon Shaped Pool tour to Australia, sadly. Thom Yorke & co. last toured our shores in 2012 behind The King Of Limbs, and fans have since fallen victim to a cruel Aussie tour prank which got everyone’s hopes up about a potential tour in 2017. Still, with AMSP still fairly fresh and the band also celebrating the 20th anniversary of OK Computer, we can think of two perfect reasons for them to make Australia’s dream a reality.

Yeezy’s had a lot on his plate since releasing 2016’s The Life Of Pablo, including US presidential bids, highly publicised Taylor Swift beefs, his wife Kim Kardashian getting mugged in Paris and of course his hospitalisation for mental illness causing the postponement of his entire Saint Pablo tour, so we can hardly blame him for putting an Aussie visit low on the old priorities list. Still, with three years since his last down under tour, it’s understandable that fans are getting a little impatient.

System Of A Down

SOAD last tore up Aussie stages as part of Soundwave Festival in 2012, and haven’t been back since. The Southern Cali rockers played a buttload of festivals across 2013, reactivated at the end of 2014, headed out on their Wake Up The Souls Euro tour in 2015, and are followed it up with dates in South America, the US and Canada. Souls in Australia need waking up too, guys. What are we, Chop Suey?

Lana last graced our shores in 2012 as part of the Splendour In The Grass lineup but, despite talk of a tour for the end of 2014, she hasn’t been back since. 2012 was the year she unleashed her hit album Born To Die onto the world, and she’s released not one, not two, but THREE albums since then. Come on Lana; third time’s a charm.

Considering that in the past year Ri-Ri has covered Tame Impala and become BFFs with ex-PM Julia Gillard, it’s basically ludicrous that she hasn’t toured down under since releasing her 2016 album Anti. In fact, the ‘Work’ singer hasn’t visited her Aussie fans since 2013. Better get Julia on the blower to sort this out.

Solange has been snobbing Aussie fans for the past three years, after last heading to our shores for the 2013/2014 Falls Festival. She’s been touring the crap out of her much-frothed 2016 LP A Seat at the Table, but hasn’t penciled Australia in just yet. Come on, Solange, we want a seat at the table too.