NewsWritten by Tom Williams on December 20, 2017

Rock-centric Aussie radio station Triple M has announced that it will launch its own Hottest 100-style countdown on Australia Day, in a surprise move which comes only weeks after triple j changed the date of its annual countdown so that it no longer takes place on 26th January.

In a statement sent to Triple M subscribers, the broadcaster has slagged off triple j while revealing that it will launch what it calls ‘Ozzfest 100’ next year.

“So, the taxpayer funded FM has decided that there’ll be no soundtrack for Australia Day. Let’s face it, that’s usually full of hipsters or kids making music on a Mac,” the statement reads.

“At Triple M, we’re going to give you what you’ve asked for. The perfect Australia Day soundtrack.” 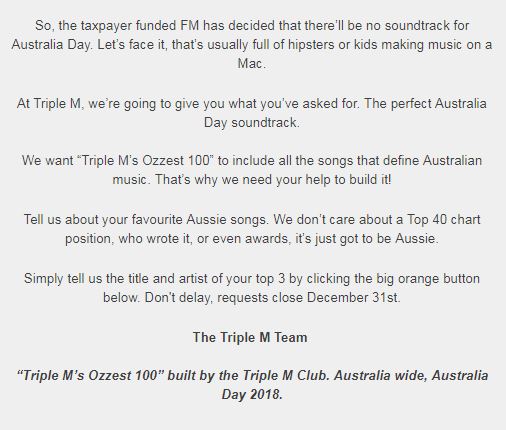 Since Triple M‘s plans have come to light, the internet’s reactions have been, well, pretty much what you’d expect…

and dissing «music made on a mac»

Triple M are hosting their own Hottest 100 on Australia Day. Tune in if you want to hear ‘Back In Black’ 100 times in one day.

In all seriousness, way to solidify your status as a bogan radio station for boomers living in the wrong side of history.

Every year Triple M employees are furious that «It’s A Long Way To The Top (If You Want To Rock ‘N’ Roll) by AC/DC does not crack the Hottest 100.

Fuck You, Triple M. One day, your latest move is going to be seen as the block in social progress that it is. I hope this is the hill that your station dies on.

Triple j‘s Hottest 100 of 2017 will be revealed on Saturday, 27th January, after the station moved the countdown away from Australia Day — a day which Indigenous Australians associate with Invasion Day.

RELATED: Hottest 100 Voting Is Now Open: Here’s Everything You Need To Know