NewsWritten by Tom Williams on January 10, 2018

ZZ Top fans have demanded refunds following what some have described as two “disappointing” shows from the band’s Billy Gibbons in the New South Wales suburb of Thirroul.

The gigs, which took place at Anita’s Theatre as part of the rocker’s ‘Up Close & Personal’ tour, promised some of the biggest songs and most intimate stories from Gibbons’ career, but ticket-holders have claimed he only played a handful of songs, and that his paid meet-and-greets were lacklustre.

Fairfax Media reports that Anita’s Theatre Managing Director Nick Josifovski said he had been contacted by people who wanted their money back following both the Friday and Saturday shows, while some took to Facebook to vent their frustrations.

“Three songs from Billy Gibbons (one repeated!), an interview from someone who had not done any research and three songs from a singer (not on the bill) who turned out to be the son of the bass player in the Billy T band (who are great by the way) is not what we expected or paid for.

“The promoters of this event should be ashamed to charge customers for this — I am not the only one on the night who feels ripped off!

“A very disappointing show from a true Rock and Roll legend-not sure what went wrong but we feel cheated.”

Memorabilia was also reportedly auctioned off at the shows, although it was apparently not made clear where the proceeds would be going.

“We had VIP tickets and managed to get a halfhearted smile from Billy in a photo,” John Heath wrote on Facebook. “Such a waste of money. It looked like he didn’t want to be there and could even acknowledge us when having the photo taken.”

In a statement of its own, Anita’s Theatre says it has passed on the negative feedback to Billy Gibbons’ management and his Australian promoters The Brewer Brothers.

“We would like to inform our patrons that Anita’s plays no part in the artistic presentation that takes place on the stage,” the statement reads.

“The venue’s part is to provide a world class space for the promoter and artist to present their show. What takes place on the stage is out of our control.”

Read the statement in full, below.

Music Feeds has contacted The Brewer Brothers for comment.

On behalf of Anita’s Theatre management, we have been following the comments and concerns over Facebook and Google Reviews in regards to the Billy F Gibbons performances last Friday and Saturday, and would like to say that we will be passing the comments onto the promoter and the artist, in the hope for a more entertaining performance for the people attending the upcoming shows in Newcastle and Brisbane.

We would like to inform our patrons that Anita’s plays no part in the artistic presentation that takes place on the stage. The venue’s part is to provide a world class space for the promoter and artist to present their show. What takes place on the stage is out of our control. When booking acts, we are sold on an idea or a concept and can not control if that idea is not fulfilled to its greatest potential.

We still believe that Anita’s management and staff delivered a professional and safe environment for its patrons, as it has done in countless other productions.

We hope you will reconsider your impression and reviews on the theatre, and continue to come back and support Anita’s, because it is the patrons who allow us to continue to work hard to attract some of the best artists in live entertainment such as: Colin Hay, Neil Finn, Sunnyboys, James Reyne, Jimmy Barnes, Angus & Julia Stone, just to name a few.

We are still extremely proud to have had a living legend come and walk the streets of Thirroul and play at Anita’s Theatre. We accept the feedback and will work even harder to make sure everyone leaves our Theatre happy. 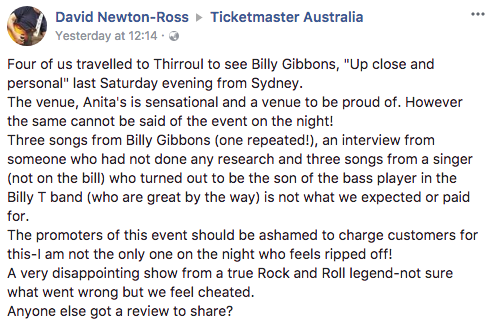