The Greens are seeing red after NSW Police launched a campaign to shut down an annual bush doof in the state’s north.

The music festival, dubbed Bohemian Beatfreaks, is set to go down across three days next weekend on a 3000 acre remote private property about 55 kays southwest of Casino.

Last year’s event was hailed a big success, with zero major drug incidents or ambulance transfers for drugs or alcohol.

The cops charged organisers a neat $10K for their policing services and even posed for lots of happy snaps with punters at the event itself, apparently — organisers tell News Corp — because they were so bored at how little work they had to do: 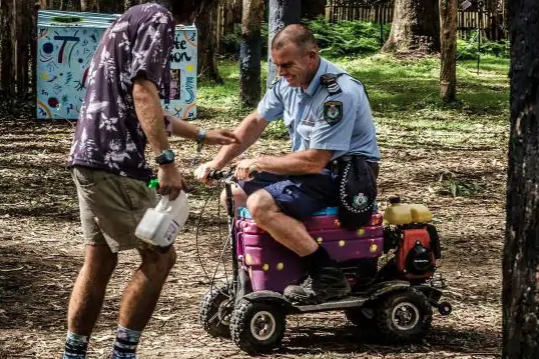 Yep that’s an officer having a crack on a motorised esky at last year’s fest. Image supplied to News Corp

But this year, much like a sloppy DJ, the po-po have abruptly changed their tune.

Now, they’re calling the event “extreme risk” and withdrawing their support due to “overwhelming safety concerns” including the potential for “large-scale drug use”.

They’ve also hit organisers with a bill for their policing services that’s no less than 20 times the amount they charged last year, a gobsmacking $200K, which means the festival is now staring down the barrel of financial collapse.

“This music festival has been operating peacefully for the past two years and now, out of the blue, they are hit with this extraordinary bill from police,” Greens MP and Justice Spokesperson David Shoebridge says in a (very nonplussed) statement.

“This is a modest festival that attracts between 2,500 and 3,000 attendees in a quiet, rural part of the state… The police propose swamping the festival with almost seventy police in a repeat of the failed over-policing of Defqon.1 earlier this year.”

“This is the first police response after the Premier’s failed expert panel on music festivals, and it shows the government is moving even further down the wrong track,” Shoebridge continues, referencing the “expert panel” that Gladys Berejiklian convened to help instruct her government on how to make music festivals safer, which interestingly contained zero representatives from the actual music industry but did contain a rep from the government’s own Office of Liquor & Gaming.

“Police have alleged ‘large-scale drug use’ as a reason for increasing their presence, but as we’ve seen time and time again, over-policing does more harm than good. The police claims are contested by the organisers,” Shoebridge adds. “In its two years of operations the festival has had no critical incidents from drug use.

“Festival-goers are far less likely to seek medical attention and far more likely to engage in risky behaviour like panic-swallowing all their drugs at once, where there is a large police presence,” he argues.

“Police and lawmakers need to be making festivals safer for young people through evidence-based methods like pill testing, not the tired and failed option of more and more police”

For the record, the state liberal government has threatened to shut down every music festival in NSW before it even considers allowing pill-testing to be trialled.

“It is absolutely disgraceful to see police wasting precious resources shutting down a regional music festival that’s brought a lot of joy to locals and visitors in the region,” Shoebridge concludes.

“Instead of fixing problems it seem the Premier’s expert panel on music festivals is taking us backwards with even more resources wasted on the failed war on drugs.”

A court battle is now under way between Bohemian Beatfreaks organisers Rabbits Eat Lettuce and NSW Police, with fears the estimated $100K in legal expenses could bankrupt the company, even if the festival is able to be salvaged.

We’ll bring you more on this story as it develops, but for now, you can catch the cops’ $200K invoice to Bohemian Beatfreaks — courtesy of The Greens — below. 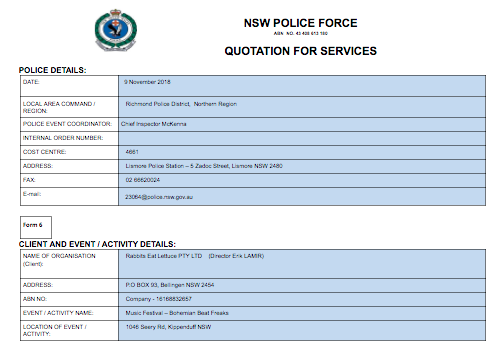 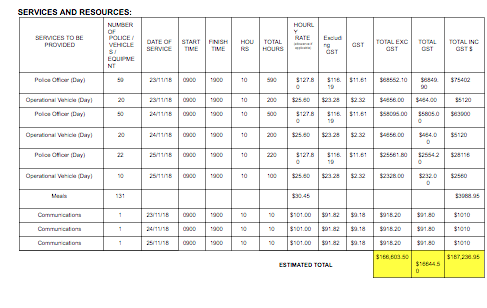