NewsWritten by Tom Williams on January 4, 2017

The 2017 lineup for California’s Coachella Music & Arts Festival has dropped, and it’s a doozy. Topped by confirmed headliners Kendrick Lamar, Beyoncé and Radiohead, this year’s roster packs some serious punch.

Aside from its A+ headliners, the 2017 Coachella lineup also features the likes of The xx, Travis Scott, Bon Iver, DJ Snake, Future, Lorde, Justice, New Order, Porter Robinson and Father John Misty — and that’s just the tip of the lineup iceberg.

As for the Aussies, Empire Of The Sun, Jagwar Ma, King Gizzard & The Lizard Wizard, The Avalanches and Pond lead our local contingent.

Headliners Kendrick Lamar, Beyoncé and Radiohead were actually first rumoured for the festival back in November, and now it’s finally becoming a reality.

Interestingly, New York hardcore band Show Me The Body, who are named on the 2017 Coachella lineup poster (below), have taken to Twitter to say they never agreed to play the festival. Here’s what they’ve had to say:

UPDATE: We never agreed to play Coachella. We were offered but we said no. Hopefully @goldenvoice and @coachella will not exploit our name.

OR GIVE US ALL THE MONEY

Catch the full lineup alongside ticket details, below. 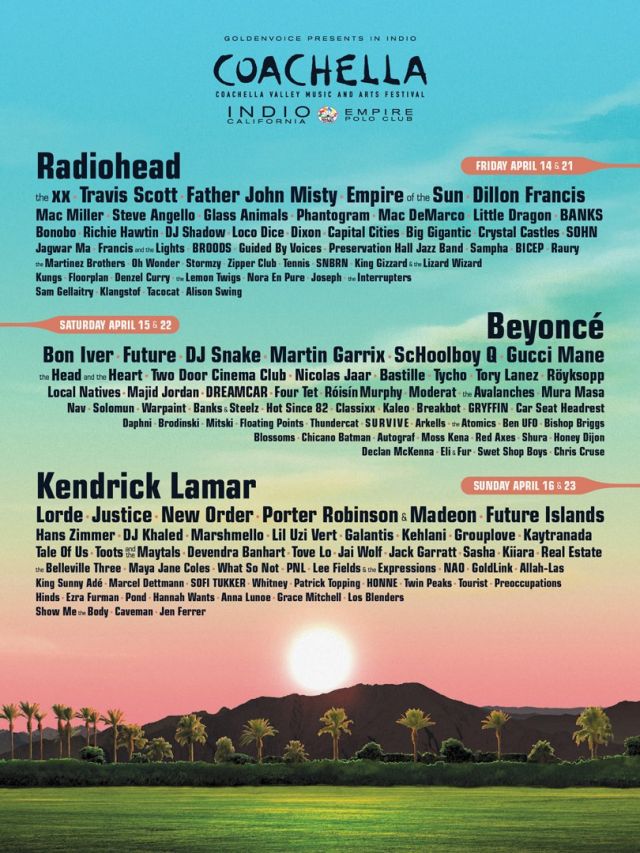