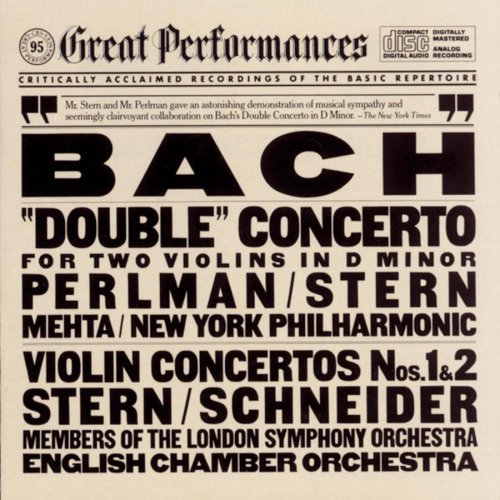 This compilation of Bach’s Violin Concertos has been in the CBS (now Sony) catalog since 1983. The recordings themselves are older. The «Double Concerto,» from a live concert conducted by Zubin Mehta, attains considerable eloquence in the slow movement and has plenty of energy, although the orchestra is oversized for its task and isn’t transparent enough. In the First Violin Concerto, Isaac Stern unwisely divides his attention between playing and conducting. His playing sounds routine, as though his mind weren’t completely on it (as it isn’t), and the orchestra’s playing is pedestrian. The Second Concerto benefits from the alert leadership of Schneider and Stern’s more sharply focused playing. In all, these are good mainstream Bach performances, although not as stylish as period-instrument versions of the same works. The price is reasonable, but the program is only LP length. –Leslie Gerber