Nobody was really all that shocked when Austin Carlile announced his departure from Of Mice & Men late last year. It was well known that poor guy had been suffering badly from Marafan syndrome, a genetic disorder which had caused him health scare after health scare during his six-year tenure with the Orange County metalcore crew, and nobody could blame him for bowing out of the game to take better care of himself.

What is shocking, however, is that it now appears as if Carlile’s dodgy health wasn’t the only reason behind his decision to quit the band at the end of last year.

Rock Feed notes that — after exiting — Carlile unfollowed guitarist/new vocalist Aaron Pauley on social media (#ouch) and recently posted a series of tweets, which seem to be directed at his ex-bandmates:

if a person, or group of people, are in your lives trying to silence your voice or demean your beliefs, cut them out of it entirely.

if people in your life try to keep you quite, or disagree w/ your beliefs when they no longer benefit from them, get them OUT of your life.

true friends will buckle down & help you change the world. fake friends only want you to help the world as long as it benefits themselves.

I’ve been SO incredibly happy since I dumped ppl who were trying to silence my voice & only stood by my side when they were to gain from it.

There’s been some speculation that Carlile, who became a born-again Christian last year, wanted to express more of his faith in his lyrics, but the rest of the band wasn’t down with it, and a new Instagram post from the former OM&M frontman seems to confirm the rumours at least somewhat.

In response to a fan who asked whether Carlile would be continuing to write with his old band, despite no longer performing with them, the singer replied: “I will no longer be writing with them, one of the reasons I left. They weren’t going to let me write what I wanted on the next record. That’s not gonna happen. I will write what I want despite what that means giving up.”

At the time of his departure from OM&M, Carlile said: “The band will now still continue on just the four of them, and I wish them the best of luck without me heading into 2017,” adding that he planned to stay in his new home of Costa Rica to ” heal, rest, and write” for the immediate future.

OM&M have yet to respond to Carlile’s tweets. We’ll bring you any more info as it develops. 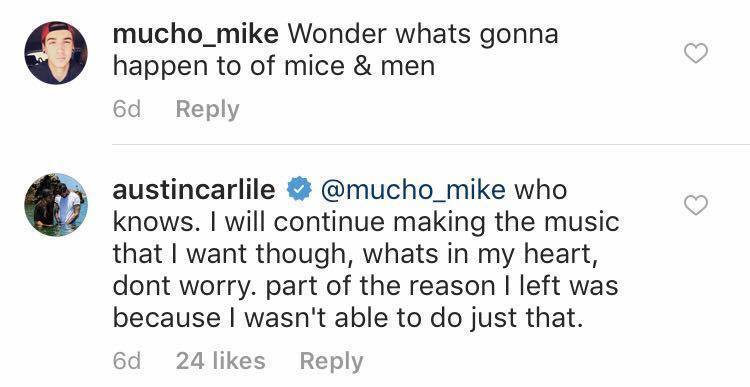