One of every 90s kids’ fave Aussie pop groups are reuniting for a brand new album and live shows!

Bachelor Girl — whose very attractive faces used to regularly adorn the pages of Smash Hits and the TV screens of Video Hits — are getting back together, a whopping 20-years after their breakthrough LP Buses & Trains: 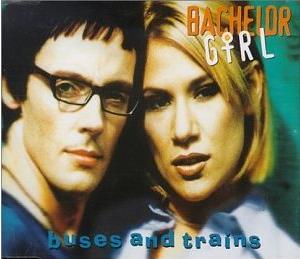 Speaking with Music Feeds from her current home in Sweden, singer Tania Doko confirms that she and songwriting partner James Roche have already been hard at work on new Bachelor Girl tunes, and they’re shooting to hit us with a brand spanking new album before the end of 2018.

“Most of the songs are written,” she reveals. “Pre-production and vocals are, I’d say, about halfway through. We have a lot to do because it’s great when I’m in town [in Australia], we get a lot of momentum going, but then I leave and life takes over. We both have children now and we didn’t have children the first time around! And we’re both living squillions of miles apart, so you can imagine just the workload and the balance of everything, it’s tricky.

“But it’s great to ‘do it again’ — pardon the pun,” she laughs. “We are older — sometimes that’s like a dirty word, we’re ‘older’ — but I think we’ve got more things to talk about, there’s a wider palette, there’s more experience… In some ways, I think I’ve honed my skills further and so has James. So we’re very excited about the material, really excited. I just can’t wait to play them to everyone.”

So what will Bachelor Girl sound like in the year 2018?

“Fundamentally the core is there,” Doko explains. “It’s big melodies and big hooks and the lyrics are quite worldly. I mean, I’m not talking about getting dumped or, you know, surviving a heartbreak relationship, that stuff isn’t really in the forefront of my brain anymore! But, there’s still a lot of irony and we’re not afraid to reveal some battle scars. So I guess you’d call it an updated version of what we always did.”

Doko — who since breaking out as a popstar in the late 90’s has made a name for herself as an accomplished songwriter — says we can expect to hear the first taste of Bachelor Girl 2.0 in “a few months” time, and that new Australian tour dates will follow!

“Probably the second half of the year,” the ARIA-winner says. “And then a lot of summer gigs — 2019 will definitely be a busy one from a live point of view. But by the end of the year we should be playing shows.”

Until then, to tide fans over, Doko will be performing a one-off solo club show at Melbourne’s Popchops on February 9th. Sadly, she won’t be unveiling any new Bachelor Girl material (“That’d be a bit weird without James there too”, she laughs), but she’ll be belting out some of the old classics as well as some of the new clubbier songs she’s penned and performed on as a feature artist (check out her latest banger ‘Dancing In The Rain’ below).

As for the 20th Anniversary of Buses & Trains, BG are planning something special for that as well.

“There’s a few surprises up our sleeve,” Doko teases.

So 20 years on, does Tania still feel the same way about love as she did when first bestowing the heartbroken wisdom of ‘Buses & Trains’ on us?

“Yeah, look I do,” she confesses. “I won’t lie, I think there was a big part of me that wanted to kind of run away from the song and the world, that’s why I travelled and came to Sweden… But as far as how I feel about it emotionally? Maybe it’s not love per se, but it’s life. You know, you walk under buses and get hit by trains. And I do get a high when I’m challenged… Right now, I’m resurrecting my band from Sweden! It’s kind of mental.

“…But it felt so good I wanna do it again,” she laughs. “In a sense that’s what ‘Buses & Trains’ is, just any sense of adventure. I think that’s why everybody related to it, because everybody does want to feel alive, even if it means it smashing you to pieces some times.”